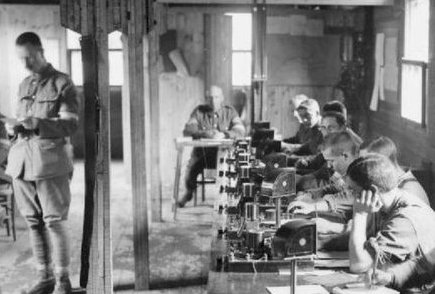 The Postal Service and the Great War

The often overlooked role of the postal service was a critical factor in communication and morale. Letters and parcels from home were eagerly awaited by the men at the front. Despite losing many employees to the armed forces (by the end of the war the Post Office had released 75,000 staff for war services) a fast and efficient postal service was quickly developed. All mails bound for troops on the Western Front were sorted at the London Home Depot by the end of 1914. Covering five acres of Regents Park, this was said to be the largest wooden structure in the world employing over 2,500 mostly female staff by 1918. During the war the Home Depot handled a staggering 2 billion letters and 114 million parcels. In 1917 over 19,000 mailbags crossed the channel each day with half a million bags conveyed in the run up to Christmas.

Graham Meacher comes from a background as a career officer in the Armed Forces with 30 years’ service. Since leaving the Army, he has worked in the Public, Private and Third sectors and currently runs the British Forces Philatelic Service - a not-for-profit Community Interest Company he set up in 2012 to fundraise for Service charities through philately. Graham has also been a volunteer with SSAFA – the Armed Forces charity - since 2001 and is actively involved locally with various groups and organisations. He is a founder member of the local History Society in Elie, Fife, where he lives.