“The Opening and Closing Shots” Tour

Two years after the Branch’s last tour, Tayside WFA returned to the Western Front in June this year. The broad theme, and the title of our tour was “The Opening and Closing Shots” – we were going to selectively concentrate on the two phases of open warfare in the opening weeks of the war, and the last 100 days or so. The tour would spend five nights based in Arras with a further two nights on the ferry between Hull to Zeebrugge.

Departing Dundee at 08:00 on the 4th June our intrepid group gradually swelled to twenty-nine as pickups were made on the way south. We must have looked a suspicious lot as three of our number were asked (by bone fide officials) to volunteer to carry drugs off the ship! A good deed as it turned out as we encountered the trainee sniffer dogs on leaving. Some clearly need more training!

An otherwise uneventful crossing saw us on our way towards the site of the first WF shots just outside Mons, with across the road the position of a Canadian patrol at 11am on the 11th Nov 1918. Alan Provan gave a stand on the VC action of L/Cpl Jarvis near the old canal, followed by a visit to the Nimy rail bridge, site of the Godley and Dease VC action. After lunch, a visit to St Symphorien Cemetery, a place more of our seasoned travellers hadn’t been. We then headed for Arras via Le Cateau where actions involving local lads were described at the railway station, Highland, and Military cemeteries with Mike Taylor and Anne McCluskey doing the honours.

Second day in the field dawned with the opening of the Battle of Amiens and a visit to the centre of the town and the Cathedral. The site of the first tank-on-tank fight followed and then on to Villers-Brettoneaux cemetery and memorial provided the locations for stands on the early part of the 100 days. Inevitably, two local men are commemorated there, one burial, one on the list of missing, their war described by Rae Taylor. Lunch in Peronne and a visit to the excellent Historial de la Grande Guerre museum was followed by the trail of the Manchesters as they took, and later defended, Manchester Hill, with Rae once again picking out the local threads. Scott Galloway completed the day with a look at the 46 Division at Ricqueval Bridge and the actions at Bellicourt tunnel, tipping our hats at the US memorial nearby.

The following day being an enforced coach driver’s day of rest, two optional walks through Arras had been organised. In the morning members heard talks at Faubourg d’Amiens memorial and cemetery, where Gordon Millar gave a talk and laid a wreath on behalf of the RAF Association at the Air Services Memorial. The afternoon entailed a guided tour of the excellent Carriere Wellington tunnels. Some more romantic members took the day off, destination Paris!

Our third day in the field took us to Le Quesnoy, stopping in Cambrai for a break and to hear from Mike Taylor about the actions hereabouts. At Le Quesnoy members were fascinated to walk the medieval fortifications and to hear from Rae Taylor about the New Zealander’s daring, and now famous, scaling of the walls in the taking of the town. After lunch we headed off to Ors, passing Landrecies and along the length of the Forest of Mormal, allowing Mike Taylor to complete the story of the BEF’s 1914 great retreat and events leading up to Le Cateau. Ors of course is Wilfred Owen’s last resting place, but prior to visiting the cemetery the group looked at the initial unsuccessful and later successful, Sambre canal crossings. Owen’s resting place companions include two awarded VCs for their part in the Sambre Canal action and an MC winner with local connections, whose brother was also decorated in WW1, their stories told by Mike and Rae. Setting off for Arras, we stopped at the new tank museum at Flesquieres which houses the female Mark IV tank, “Deborah”. On our tour two years before, the site was a concrete hole in the ground and Deborah could no longer be visited in her barn, so this was an opportunity to complete the circle. A personal pilgrimage at Wancourt British Cemetery followed with Gordon and Edna Millar paying their respects to their newly-acquired Great-Uncle in law!

Our final day on the WF took in some departures from our theme as we visited the Neuve Chapelle Indian memorial and heard from Scott about the Indian contribution to the war in Europe, including of course the battle of Neuve Chapelle itself. Mike presented about our allies, the Portuguese who were next with visits to their nearby cemetery and the mightily impressive memorial in nearby La Couture. The area also provided the opportunity for two pilgrimages. Brian Smith, himself an ex-Black Watch man, told us the story of his grandfather’s action in securing the village of Givenchy-les-la-Bassee in 1915. Standing in the village near the church which features in his grandfather’s diary lent a particular aura to his talk and diary excerpts. Further on, in Rue de Bacquerot No. 1 cemetery, lies Jane O’Neill’s great uncle where we heard his story and a poem was read.

Finally on a tour from Tayside, home of the Black Watch, a visit to Black Watch Corner is unavoidable. This impressive memorial was largely initiated by our chairman. A group picture at the Scottish Memorial at Frezenburg, lunch in Ypres and our tour was complete. Only the return journey via Zeebrugge and Hull left to get everyone safely home.

Special mention to Jane O’Neill whose morning poetry readings set the scene for each day, and to our chairman, Tam McCluskey for his several talks on local lads and the actions of the Black Watch at a number of locations. 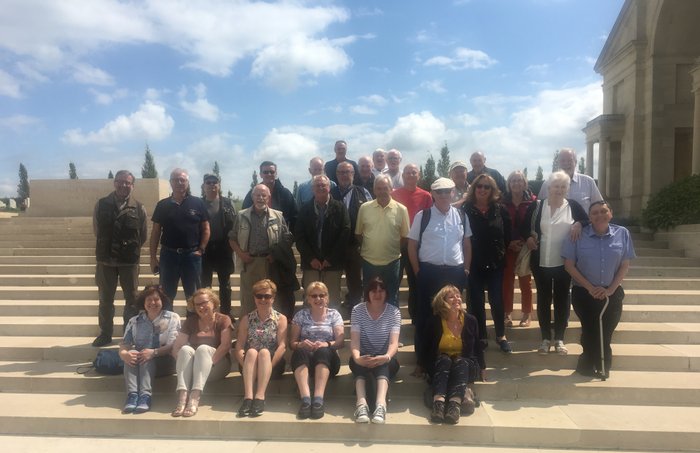 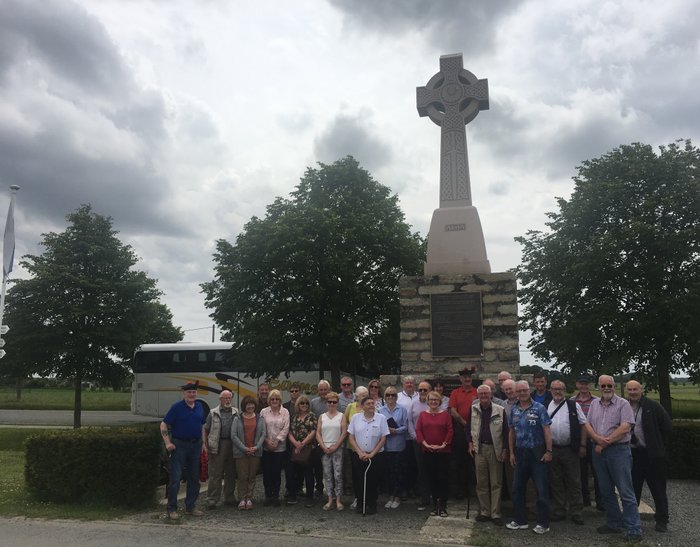 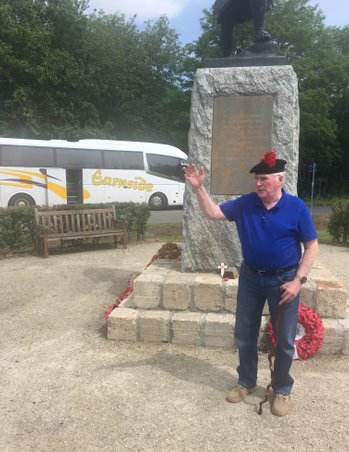 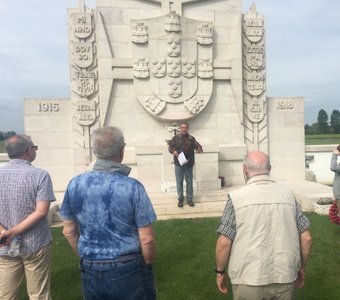 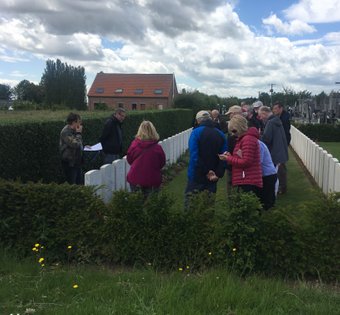 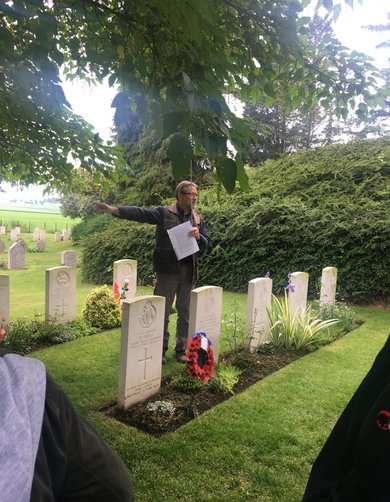 The Branch is organising a coach trip to the Western Front departing Dundee on the 4th June 2019.