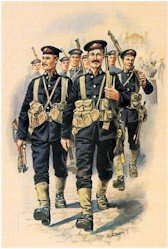 With flags flying and their band playing It’s a long way to Tipperary, 157 men of the Dundee Company, Royal Navy Reserve marched to war in August 1914. If they were expecting to fight a naval battle they were mistaken. When war broke out the Royal Navy had 13,000 reservists for whom it had no ships. These men were formed into the Royal Naval Division that would fight on land alongside the army. Over 10,000 Scots served in the RND – almost 3,000 signed on aboard HMS Unicorn in Dundee. This is the story of Scotland’s forgotten heroes’

Andrew Jeffrey served in the Royal Navy reserves and for fifteen years on Broughty Ferry Lifeboat, He has a history Ph.D. from the University of St Andrews and has published four non-fiction works. He has worked in radio and television and is currently working on a documentary about the Free French Navy. Dr Jeffrey led the Dundee International Submarine Memorial project and is an honorary member of the Royal Navy Submariners Association. He has recently undertaken extensive historical research for the McManus Galleries, Dundee, and is currently writing a book on the German military intelligence service Abwehr. He is also on the steering group for the Great War Dundee project.